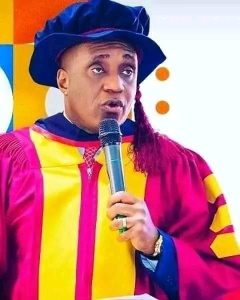 Let me share this testimony, a cult called Olumba Olumba, their headquarters is in Cross Rivers State. Listen, in 2001, I had no idea for 10 years they were going to the cemetery every day on my behalf. The confession is on tape. They said I am disturbing Olumba Olumba. Because in Port Harcourt they invaded everywhere. Every street in GRA, they had a shrine. So, I didn’t know. I just heard that in the Spirit realm they said I was troubling them. So they said whatever they have to do, they will do it against this man. So, they were making incantations in a particular grave every day. They said every day they go there. They pay them millions to do it. They did it for 10 years and all of them died except one.

Why God kept him was because he needed to tell us the story. He said when everyone died, he was on his own and God said, “Go and confess to David Ibiyeomie what you have been doing otherwise you will be dead.” He woke up and saw nobody. He came on his own, he came to confess he said he is a prophet of Olumba Olumba. He mentioned his hierarchy; he was among the first five. He said this was what has happened, for 20 years we have been after you.

I said it is nonsense I won’t see him. I told some young men to attend to him. They recorded him as I am talking to you. The man is in Church. He is born again now. But that is not where I am going, they did not stop there. When they could not fight me spiritually they said, “frame him up, that the miracles he does is a magic from India.”
How many of you were in Church when I said it? They went and showed the egg. They said the miracle I do that I have buried an egg inside the altar. That is why I could not open branches. They said the reason I am yet to spread yet is because if I spread the miracles won’t work and without knowing, that month we opened branches.
They now asked, “the man you said he can’t open branches, the thing he buried is it not there again?” He came to confess everything.

If I was not a vengeance type they wouldn’t have died, if I was praying, “oh God show mercy oh show mercy.”

Listen, don’t be the kind of Christian that you will say God have mercy. 1st Samuel 2:6. May the killing part of God now strike your enemies.

Lift your right hand and say in the name of Jesus anyone doing me, with evil secretly or openly now open fire.

Tags: HOW OLUMBA OLUMBA TRIED TO BRING ME DOWN || Pastor David Ibiyeomie
SendShareShareTweet

ANGLICAN DAILY FOUNTAIN DEVOTIONAL FOR JANUARY 9, 2023 (CALM DOWN, GOD IS IN CONTROL)

RHAPSODY OF REALITIES DAILY DEVOTIONAL FOR NOVEMBER 14, 2022 (THE SPIRIT AND THE WORD)