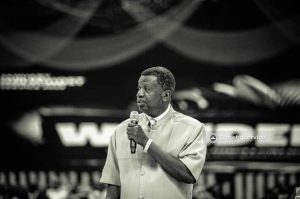 The devil fought since morning that I won’t be here this evening. You say, “what happened?” I’ve been in my prayer room for days; I didn’t go out. So you can’t say that I went out and I ate something bad yesterday.

No! Then I woke up this morning with terrible stomach disorder, pain the kind that I’ve never experienced for a long time.I went to the toilet expecting that I will ease myself and everything will go. I began to ask myself, “What did I eat? What did I drink?”

I had to go and pray with the senior pastors at 6pm. I am telling you the one hour I spent with them was a little hell on Earth.. They didn’t notice though, I hid it from them because I didn’t want them to panic.

So I managed to get back to my prayer room after I left them and the service started and the pain grew worse.

Little by little, I was listening to the preacher (Thank God for the preacher), even though I was in agony. Then all of a sudden, he said something: Say Amen somebody! . He said there was a brother who said Amen and what was troubling him got out of him. So I said Amen, loud and clear! He said that before the end of his message.

By now I should be getting dressed but the stomach was still misbehaving. But few minutes after I said, ‘Amen,’ I just felt something saying run to the toilet. . I ran to the toilet and what was troubling me got out.

– Whatever is troubling you, stand on your feet and shout, “Amen.”

ANGLICAN DAILY FOUNTAIN DEVOTIONAL FOR JANUARY 9, 2023 (CALM DOWN, GOD IS IN CONTROL)

SEEDS OF DESTINY DAILY DEVOTIONAL FOR JANUARY 9, 2023 (A DIFFERENT APPROACH:  THE CURE FOR PERSISTENT REPROACH)

CHRIST EMBASSY RHAPSODY OF REALITIES DEVOTIONAL FOR MARCH 29, 2022 (IT WAS FOR YOUR SAKE)

SEEDS OF DESTINY DAILY DEVOTIONAL FOR JUNE 30, 2022 (THE OUTCOME OF ENGAGEMENT WITH THE SPIRIT)