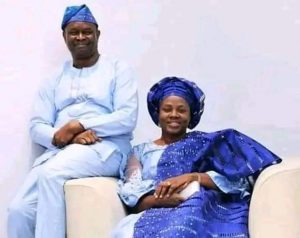 He said God showed his wife where the trumpet was blown and she discovered that she was being lifted like a person in an elevator. He said she was lifted alongside others and their clothes turned into white colour, and they were all assembled in a room in the cloud.

The people in the room were very excited as they congratulated one another for making it that far. In the process, she saw a tall handsome man who told her she will go back to the earth to work more for Him. She was reluctant because she didn’t want to come back to earth but the man took her into His palm and threw her back to the earth. He said she woke up from the vision with the tears of joy she was shedding still in her eyes.

He said what God showed his wife about the rapture has never left his heart and that he has never stopped to imagine what will happen when the believers will gather to meet Christ in the cloud at the sound of the trumpet of rapture. According to him, it will be the wedding feast in the cloud.

Tags: TAP TO READ WHAT GOD SHOWED MY WIFE ABOUT THE RAPTURE THAT HAS NEVER LEFT MY HEART BY EVANGELIST  MIKE BAMILOYE  FREE ON LAPTOPS AND PHONES
SendShareShareTweet

BENEFITS OF SPEAKING IN TONGUES BY PASTOR CHRIS OYAKHILOME

A TRUE LIFE STORY  BY PASTOR E A ADEBOYE