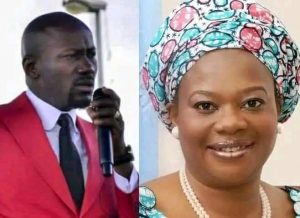 Apostle Suleman spoke about Dora Akunyili when he was addressing his congregation why women need to be humble to their husbands regardless of their social status and what they may have done for their husband.

Apostle Suleman said he and the late Dora Akuyili were quite close. He said, no doubt, she was a tough woman. When he entered her office, she had plenty of awards. When she called for men to come, their legs would be shaking. He said he asked her why their legs were shaking, and she answered that he should ask them.

Apostle Suleman said even though the woman is tough, he noticed something. When he was talking to her and her husband called, she stood up in reference to her husband. He said he melted because, with all her power, she still respected and honoured her husband.

He said that some ladies, little things or assistance that the wife did to her husband, she would assume the position of authority and would start troubling the husband. He said women who really have power and influence are submissive to their husbands.

Apostle Suleman then said that wives should learn to submit to their husbands.

YOU CAN'T FAKE IT! BY ANNONYMOUS

SEEDS OF DESTINY DAILY DEVOTIONAL FOR SEPETEMBER 3, 2022 (THE POWER OF DESPERATION)