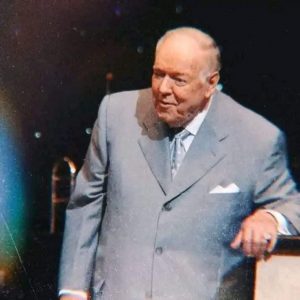 OVERVIEW
A certain church I held a meeting in was the most difficult church to preach in I have ever seen. The people were good people. They loved the Lord. They loved my preaching. But it was tough to preach there. The very atmosphere was hard. Everything I said seemed to bounce off the wall back into my face.

Some months later I was back in the area, preaching a revival at another church. I went back to this first church and spent some time with the pastor and his family, I spoke at a New Year’s Eve watch night service for them. The next day, the pastor’s wife asked, “Brother Hagin, can you see any difference in our church?”
I said, “What do you mean?”
She said, “Is it any easier to preach? What about the pulpit now?”

I said, “There’s as much difference as between daylight and dark. It doesn’t seem like the same pulpit. It doesn’t seem like the same church.”
She said, “Get my husband to tell you about it.”
He said, “I don’t tell people about it, because they might think I am crazy, but I will tell you. This was the hardest church I ever preached in. The pulpit seemed to hold me in bondage. I knew the people loved me. They supported us well. We had good fellowship with them in their homes. But that pulpit was like a prison. I began to fast and pray about it. The seventh day of my fast, I was kneeling on the platform about three feet behind the pulpit, when I happened to look up directly over the pulpit. The ceiling disappeared.”

Discerning of spirits came into manifestation. God allowed him to see into the spirit realm. He saw, sitting up in the rafters directly above the pulpit, a huge spirit. It looked like a big baboon. It was as large as a man.
The pastor said, “I found myself saying to him, ‘You’re going to have to come down.’ He said nothing, but he seemed to draw up as if he didn’t want to obey.’ I said, ‘You come down in the Name of the Lord Jesus Christ.’

He felI down onto the pulpit; then jumped to the floor. I said to him, ‘You get out of here!’ He said nothing, but looked at me as if to say, ‘I don’t want to.’ I said, ‘Just march right out of here, in the Name of Jesus.’ He marched down off the platform. I marched right behind him. He would go four or five steps; then stop and look at me, almost begging. I would say, ‘No, go on.’ But he wouldn’t move until I said, ‘In the Name of Jesus.’

“We went down the aisle that way, stopping every four or five steps. I went ahead of him and held the vestibule doors open. (The spirit could have gone through the doors, of course, but this is what the pastor did.) That thing would not go through until I said, ‘In the Name of Jesus.’ “Then I opened the front door. I stepped back and said, ‘Move on out.’ He stood there. He never said a word, but I could tell by the expression on his face, he was begging me,
‘Don’t!’ I said, ‘In the Name of Jesus/ and he moved.

“He went down the church steps and got half way out into the yard. Then he stopped, turned around, and looked at me again. I said, ‘No, you don’t. You go on in the Name of Jesus.’ “He went as far as the curb. I said, ‘You’ll have to go on. And don’t ever come on these premises again.’ He stood there until I said, ‘In the Name of Jesus.’ Then he ran across the street and down the other side about a quarter of a mile. I watched him run into a nightclub called The Green Hut.
The next night it burned.

Tags: TAP TO READ DEMONS ON THE PULPIT BY KENNETH E. HAGIN FREE ON LAPTOPS AND PHONES
SendShareShareTweet

RIGHTEOUSNESS PAYS IN THE DAY OF TROUBLE BY BISHOP ABIOYE SPEAKS

JOSEPH PRINCE DAILY DEVOTIONAL FOR JULY 19, 2022 (TRUST GOD, NOT MAN OR SELF EFFORT)