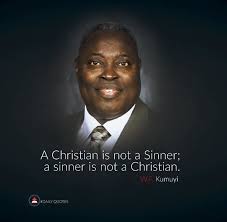 2 The same was in the beginning with God.

3 All things were made by him; and without him was not any thing made that was made.

4 In him was life; and the life was the light of men.

5 And the light shineth in darkness; and the darkness comprehended it not.

6 There was a man sent from God, whose name was John.

7 The same came for a witness, to bear witness of the Light, that all men through him might believe.

8 He was not that Light, but was sent to bear witness of that Light.

9 That was the true Light, which lighteth every man that cometh into the world.

Following the assassination of President John F. Kennedy of the United States of America on November 22, 1963, a leading news magazine asked one of its famous writers to come up with a story on the tragic event. For him to produce the expected masterpiece he was noted for, he was said to have been locked up in a room to avoid distractions. After some hours, the great essayist had typed a few opening paragraphs. An editor who sneaked in told his colleagues that from the little beginning he saw, the world should expect an opus.

In the Bible, God also speaks of the importance of beginnings. He refers to a beginning that gave mankind bigger prospects. That start triggered a process that has not stopped, unlike the ephemeral business of secular writing. This text of Scripture is the great story of pre-creation that reveals the relationship within the Trinity and the incarnation of Christ. Christ is the Word through whom all things were made. He brought life and light into the world of darkness.

For mankind to be on the same page with His Maker and enjoy an enriching relationship with Him, we must always cherish our beginning and its Author and let it count as the unforgettable foundation of our existence. While there may be a host of beginnings, we must acknowledge only one, namely the one recognised by God. And that is the beginning of our encounter with Jesus Christ, “the Word (that) was made flesh, and dwelt among us”.

Any existence without salvation through faith in Christ as its bedrock or beginning is heading for peril and destruction in the storms of life. The person downplaying the place of such an experience is marked for grief here and hereafter. Those who have disconnected from Him and hiding in false religious fortresses should retrace their steps to Calvary and rediscover their joy.”

THOUGHT FOR THE DAY:
No one discovers their true root and worth until they discover Christ.

DCLM Daily Manna was written by Pastor W. F. Kumuyi; is the founder and General Superintendent of the Deeper Life Bible Church situated at KM 42 on the busy Lagos-Ibadan Expressway, Nigeria.

RHAPSODY OF REALITIES DAILY DEVOTIONAL FOR JANUARY 4, 2023 (IT’S FROM YOUR HEART)