DO YOU WANT TO KNOW GOD? FOLLOW THESE 6 STEPS NOW!!

Secrets that reduce your prayer points. by Apostle Joshua Selman

Who is the Holy Ghost to you? by Apostle Joshua Selman 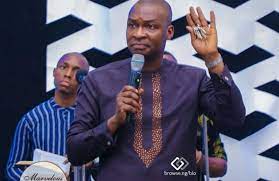 This is how we get results in this kingdom. It starts with an encounter and ends with an awe-inspiring result.
This is the equation. If you want to excel this year, this is what you will need to pass through; an encounter, yes, an encounter!

That means, for instance, if you want to prosper then there is a dimension of God you have to encounter.
When you encounter Jehovah Jireh, there is something about that name.
You have that encounter it produces revelation of the principles contained within Him to prosper you.

Then, it creates conviction. Now, you can give. If God tells you to empty your account, you are not wondering will it happen.
You can take a step of faith because it’s from a stand point of conviction.
I tell you why the giving of many people never produces results, it is either for many people, nothing circular at all, but for many people, it is out of pressure and then for others, it is out of religion.
Yet, for others, it is even competition and so there is no life that sponsors that activity.

You give out of conviction and watch what happens. There are times that your harvest is waiting right there where you are keeping the seed.
You drop the seed and pick the harvest. Your conviction can stretch you that far.
Are we together?

And so people bring their tithes and bring their offerings like a bribe in anger hoping that God sees them and hoping that God sees their anger.
‘’Lord, I’m dropping the—if I erm—I empty— it’s my account I emptied now. I hope you are watching’’ and God says “what is your idea of me?’’ if you being evil know how to give good gifts, is it in your Bible?
But somebody comes and says “Lord, I trust you”.
When you give to a rich man do you cry?

When a rich man says I’m looking for change, you are quick to bring it because you know what will be your reward for meeting a rich man’s need.
Every man blesses according to his riches in the bank. That’s how men bless.
Unfortunately, God’s bank is called Glory. So, he supplies your need not according to your need because sometimes your need is an insult so, He has to supply it according to His riches in glory.

Please, don’t think I’m just motivating you. It’s true.
The people that do know their God, when you give from a stand point of an encounter, that spirit of giving is at work.
You understand that your seed can bruise the head of a serpent. it’s true.
You know, you understand a dimension of God that brings favor and you know you are carrying it, you see that.

That conviction, every time you see people it is as if they owe you.
You expect them to respond to the anointing on you so when you see them looking at you, you know it is working.
They are under the influence of something, like a charm.
They may not know but they say “erm, I’ve been looking for you” of course, you have been looking for me.

One of the greatest revelations about satan is that he, it’s not just that he is defeated, is that satan can be tired.
That is a very powerful revelation because people faint when they are tired.
A man can be defeated and still stubbornly try to lay claims, that’s what satan does but there is a system that provides weariness to the point that he will even flee.

It is a system of Resistance. The Bible says “resist the devil” You need to know what that resisting is, that there is something a man can do to the devil and you watch him, he watches you and goes.
Resist the devil and he will flee.
Is God speaking to someone tonight?

Because we need to come out of this conference full of faith and conviction, some of you need to run and go back home and say “this is it.
I wrote my prayer points and edited some out of unbelief, I’m adding them back.

I’m adding them back and I’m reducing the time for their manifestation” because something about the knowledge of God has entered your spirit.
Look at what happened to people in the Bible every time they had dimensions of encounters with God, it changed their perspective. Ahh!
Look at David for God sake, look at David, look at David standing before Goliath.

How can a little teenager watch very strong veterans, military veterans and this young boy comes to serve food and hears a beast roaring.
Six fingers and six toes and David laughs, he says “God I know something about you that can throw this man’’ and then he went to Saul, he told his brothers, his brothers said “return home before we beat the living day light out of you’’ and then he met Saul.

Saul only asked a question “what tribe and what family are you coming from?’’ and then he allowed him, gave him spears and he said “no,
No, I wasn’t trained with this formula, the God I know does not need all of these things” David is standing before Goliath, remember you are intelligent.
When David stands before Goliath, you expect him to shake and David is just imagining his testimony.
He was so sure, he said “what will be my reward first” They said “one, you will marry the king’s daughter’’ I mean what a joy, who doesn’t want that kind of stress taken off you.

The stress of call, text, will you marry me? automatically, in one sweep.
Please, sit down. “Number two, your family will be exempted from task. Number three, you will be rewarded” David said “let’s go’’ and he stood before Goliath.
Goliath felt insulted he said ‘’I know I will kill you but am I a dog? Israel, is this your best, you can’t even respect me’’ and David said ‘’you keep watching.

You come to me with your bows and your spears but I come to you in a name”
I come to you in a name, let me tell you.
There was a revelation that David knew. James 2:26, that anybody without a spirit backing it is dead, David knew that.
That a body is only alive based on the spirit that backs it.
The size of a body does not matter, when a body without a spirit stands before you, it’s as good as dead and David looked and said “there is nothing backing this man.

Let’s stand, I can go. This is cheap victory”
And then he told him, he said “mister, let me even tell you how I’m going to kill you.
Number one, you see this sling, it’s going to hit your head then you will be on the ground and I will use your own sword, cut off head and then I will lift it up’’ and then Goliath said “I see”.

I can imagine God in heaven saying “who is this? Who is this young boy putting pressure on my integrity”
Listen, I believe, now the Bible does not say it but I believe, no matter what direction that stone touch Goliath, he still would have died.
It wasn’t about the accuracy of the forehead, any part of him. Goliath was already dead.

Hallelujah! And Goliath falls to the ground and that becomes great victory.
Your destiny is at the mercy of a dimension of God you know, that is why it matters which man of God introduces God to you and it matters what he tells you about God.

Were You blessed by this powerful charge by Apostle Joshua Selman?
Do You want to get more of these life-changing writeups by Apostle??
You can get thousands of them on our website.
Click here to get them for FREE NOW!!!
👇👇👇
https://writtensermon.com.ng/category/written-sermon

Secrets that reduce your prayer points. by Apostle Joshua Selman

Who is the Holy Ghost to you? by Apostle Joshua Selman

How to turn your failure to your advantage. by Apostle Joshua Selman

Where Is Your Scar??? by Apostle Joshua Selman

3 Fears You Must Conquer to be Great in Life! REVEALED!!! by Apostle Joshua Selman

Christ Embassy Rhapsody of Realities June 24, 2021 (Avail Yourself Of His Power In You)