ANGLICAN DAILY FOUNTAIN DEVOTIONAL FOR JANUARY 8,2023 (DO THE RIGHT THING)

ANGLICAN DAILY FOUNTAIN DEVOTIONAL FOR JANUARY 8,2023 (DO THE RIGHT THING) 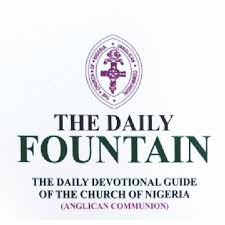 TOPIC: DO THE RIGHT THING

TEXT: Acts 10:34-43
34 Then Peter opened his mouth, and said, Of a truth I perceive that God is no respecter of persons:

35 But in every nation he that feareth him, and worketh righteousness, is accepted with him.

36 The word which God sent unto the children of Israel, preaching peace by Jesus Christ: (he is Lord of all:)

37 That word, I say, ye know, which was published throughout all Judaea, and began from Galilee, after the baptism which John preached;

38 How God anointed Jesus of Nazareth with the Holy Ghost and with power: who went about doing good, and healing all that were oppressed of the devil; for God was with him.

39 And we are witnesses of all things which he did both in the land of the Jews, and in Jerusalem; whom they slew and hanged on a tree:

40 Him God raised up the third day, and shewed him openly;

41 Not to all the people, but unto witnesses chosen before God, even to us, who did eat and drink with him after he rose from the dead.

42 And he commanded us to preach unto the people, and to testify that it is he which was ordained of God to be the Judge of quick and dead.

43 To him give all the prophets witness, that through his name whosoever believeth in him shall receive remission of sins.

MESSAGE
Peter was focused and direct in the sermon he delivered at Cornelius’ house. He did not waste time in making expressions that had no relevant connection to the word of salvation.

He seemed to understand the demand of his moment and utilized it to present a holistic gospel that touched the lives of his audience. His message was centered on Christ. Observe equally that Peter did not allow the personality of Cornelius to influence the direction of his message. In fact, he preached to save Cornelius and his family, not to please them.

Assuming you were given a similar opportunity to preach at the house of the Chief of Army staff in your country, will you preach an uncompromised as Peter did? The message of the kingdom is aimed at saving people, not pleasing them. Many of us today assess sermons based on what excites our emotion and pleases us rather than what God desires for us to hear.

Some preachers even change the topic of their messages just to satisfy the assumed interests of influential hearers. It is bad to leave the substance and chase shadows. Learn to do the right thing always.

Prayer: Help me, O Lord, to make good use of every opportunity I have to hear your word and to reach out to others. Amen.

Tags: 2023 (DO THE RIGHT THING)  FREE ON LAPTOPS AND PHONESTAP TO READ  ANGLICAN DAILY FOUNTAIN DEVOTIONAL FOR JANUARY 8
SendShareShareTweet

RHAPSODY OF REALITIES DAILY DEVOTIONAL FOR JANUARY 8, 2023 (NEVER GET FRANTIC)

RHAPSODY OF REALITIES DAILY DEVOTIONAL FOR JULY 17, 2022 (MINISTERING IN THE SANCTUARY)